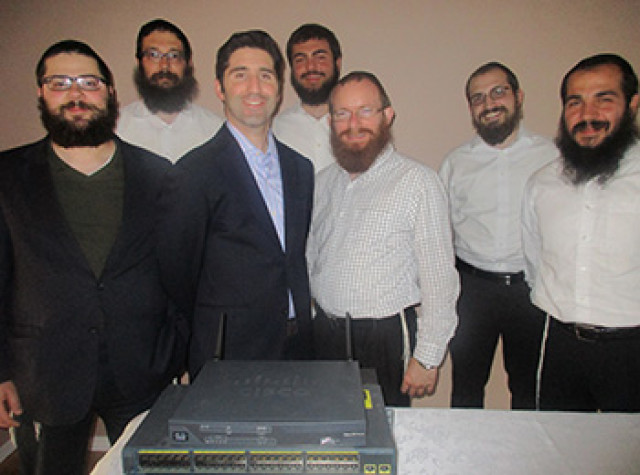 After noticing some members of the religious community struggle to make a living, Ron Shuster, a 38-year-old telecommunications veteran and a member of Thornhill’s Lubavitch community, was inspired to address the needs of the Orthodox community.

“I think it is a well known fact that within the religious community… there are a lot of guys who go through the system, go to yeshiva and whatnot, and at the end of the day a lot of them don’t pursue higher education,” said Shuster, who has been working in the information and communications technology field since 1999.

After having a conversation last year with a young man who was fresh out of yeshiva, Shuster sought to provide his peers with an opportunity to build promising careers.

“There was a young guy in his early 20s, not married yet, and he said, ‘how do I get into this industry?’ This kind of triggered the whole chain of events.”

Shuster, who has the highest level of certification with Cisco – a global leader in telecommunications systems, ranging from security to wireless technology, to data storage – did some research into the training program offered by the company.

Through Cisco Networking Academy, an IT education and career-building program available to individuals and universities and colleges worldwide, Shuster got to work getting approval to lead a pilot program geared towards the frum community in Toronto.

“The goal was to bring this very niche, specialized market to the young Jewish community. These courses are available at colleges, and in Ontario, they are recognized by the Ministry of Education,” Shuster said.

“Having a bachelor’s degree from York [University] or wherever, after four years and after spending $40,000 or $50,000, what’s next? The challenge is, they get married and they have to put food on the table, there is rent or mortgage, and you know the rest. So the idea is, let’s avoid going through a four-year BA degree.”

Earlier this year, Shuster ran the pilot, which was a course that teaches students how to design, build, troubleshoot, and secure computer networks. It required 100 in-class hours at the Cheder Chabad in Thornhill, in addition to the completion of labs to materialize the concepts into practical, hands-on application.

He said the Canadian Cisco Networking Academy representative provided Shuster with the hardware and other resources required for the course at a heavily reduced rate and committed to helping him launch a co-op program.

Eli Wasserman, 22, was one of the 10 participants in the pilot program, who graduated from yeshiva and took part in the course in hopes of finding a lucrative career in the field of networking and technology.

“I went through the complete yeshiva education system, and I appreciated it and I enjoyed it, but at the age of 22 or 23, when you finish the yeshiva system, you usually end up in an interesting spot, because you’re left in the middle of the world,” he explained.

“Sometimes it’s impossible to go to college and put in another four or five years [at school]. Especially in these communities, it is hard for people to end up in career-based jobs. They usually end up doing sales, or you’ll find a lot of entrepreneurs, and they do succeed but it’s hard to find career-based jobs coming out of the yeshiva system.”

Wasserman explained that throughout his eight months in the program, he learned how to run a company’s network.

“This Cisco course is meant for the networking part of IT, which is running the very back end of a large business. An example would be Walmart. They have locations all across North America and they have a complex computer system running the business. They have to know inventory in order to ship certain products… so they have this whole computer system that someone like me would maintain and build so that all the computers are communicating with each other.”

“People are looking at me as a qualified participant,” he said.

“We’re reaping the fruits before we expected to reap the fruits,” Shuster said.

“We didn’t expect anyone to get a job after Round 1 because it is so basic, but there were some people who went above and beyond the scope of the course. I sat with them and they did some more labs and they went at a faster pace. I have one person now with a full-time job and two people who are doing some contract work.”

Shuster said that he’d like to build on the success of the pilot and secure sponsorship and funding to build a program, as well as rent a space to serve as a community resource centre for people in the IT field.

“These certifications are globally recognized and highly appreciated. So my idea is to bring this skill to the Jewish community and help young guys who have the head for it, the analytical skills, the troubleshooting, thinking-outside-of-the-box type of skills,” Shuster said.

“It is said that providing a person with the means to make a living is a greater mitzvah than giving him tzedakah,” Shuster said.

“We are currently looking for funding in order to turn this dream into a tangible reality, thereby minimizing [the need for] community funds for the needy.”